We create the future of Industry 4.0

We rank among the top of automation market, and our production lines and machines can be found all over the world - not just in Europe, but in China, Russia, USA or Mexico.
COMPANY PROFILE OUR HISTORY ECONOMIC RESULTS PROJECTS CO-FUNDED BY THE EUROPEAN UNION

We bring added value to our customers and help them break through on market and surpass the competitors. Thanks to the unbiased point of view and experience of our engineers, we are finding new, innovative solutions for the construction and manufacturing problems. New ideas, cutting-edge technology, higher quality, speed and the best quality/cost ratio are crucial for any market player – and we are here to help you catch up with the fast-changing and expanding market.

2000 – Establishment of a branch office in Prague. Expansion of construction works for the production and development of single-purpose machines for industrial automation.

2001 – For the first time, we exceeded the annual turnover of 30 milions CZK, with 20 employees on board.

2003 – New offices in Pardubice to have more space for the construction and production works, with 30 engineers and 5 manual workers.

2006 – The company broke the 100 millions CZK annual turnover limit. The number of engineers increased to 35.

2007 – More than 200 single-purpose machine projects have been realized.

2016 – New company headquarters are built in Pardubice to accommodate the growing team.

2018 – JHV-Engineering recognized as EY Technological Entrepreneur of the Year, awarded both on the regional and on the country level. Read more here. 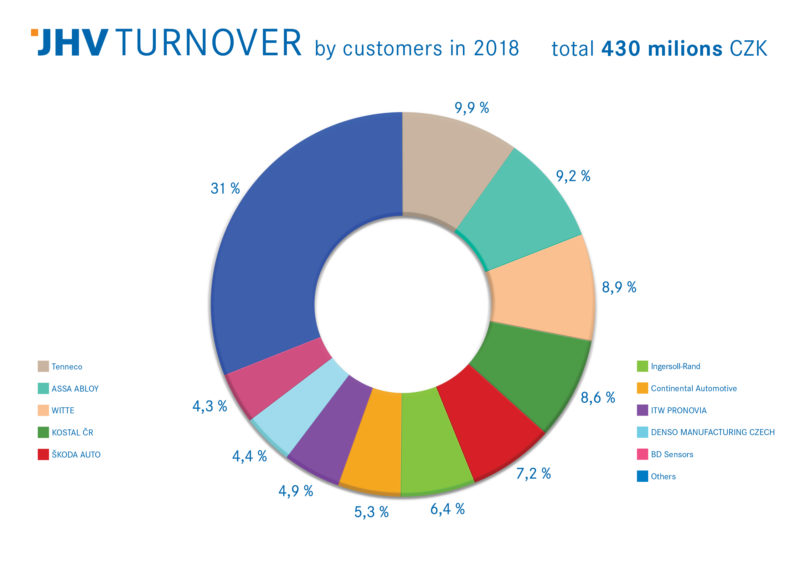 PROJECTS CO-FUNDED BY THE EUROPEAN UNION

The aim of the project is to update the company’s strategy, including mission, visions and values, incorporating the principles of age management.

The project is co-funded by the European Union.

Project title: Extension of the research and development infrastructure of JHV-ENGINEERING s.r.o.

The aim of the project is to substantially extend the research and innovation capacity (RIC) of JHV-ENGINEERING, s.r.o. The project is realized in Pardubice in the current premises of the company at Nádražní 641, Rosice, 533 51 Pardubice.

Within the project will be purchased machines used for research and development of the company and SW necessary for providing R & D activities in the field of development of machines and equipment for the fields of automotive, medicine or electroprojection.

The project is co-funded by the European Union.